At its inception, PPL on the Outside was rooted in exploring the wilderness and curated trails of Potsdam and beyond. The more I talked about it, the more I had people telling me I needed to talk to and coordinate with Blair Madore. I didn’t know Blair at the time but was quick to learn that not only is he a math professor at SUNY Potsdam, the vice chair, education of the Adirondack Mountain Club Laurentian Chapter and the Red Sandstone Trail Coordinator, but he is a staunch advocate for getting into the wild.

By the time we finished our first call together about free, outdoor programming, we had agreed to a partnership between PPL and the ADK Mountain Club and scheduled an autumnal, two-day walk along the Red Sandstone Trail that would highlight both its natural and historical setting.

Since then we have had several hiking and snowshoeing adventures in and out of the Adirondacks. We even coordinated a Pirate Hike for kids on Sugar Island, where Blair regaled families of the legend of the Pirates of the Raquette River and had them search for lost treasure.

While we are working on more free, outdoor adventures together for our community to participate in, I sat down with Blair to talk about his love of nature and of all things Potsdam, and below is Blair, in his own words, kicking it off in his feelings about Potsdam in a nutshell. “Life in Potsdam is good!”

Be well and we’ll see each other soon!

“Life in Potsdam is good. For people who don’t know me, I lived in Toronto for a long time before I came to Potsdam, and of all the things I wanted in life, I wanted to live in a small college town with access to nature. I thought that was a place in Ontario but it turns out it was a place in New York. In fact, the place in Ontario I had set as a goal to live is actually nowhere near as good as Potsdam, when it comes to that small-town life with a great access to nature.

“So that is a big part of what endears me to Potsdam.

“(O)ur club puts on a lot of regular activities. Sometimes it reaches a lot of people and sometimes it doesn’t and working with PPL on the Outside has been great because it has managed to tap into a different segment of people who might be interested in this kind of thing. (S)o we got to do some great activities, and a bunch of different people participated with us, and I am certain that those people have done more activities since and will probably continue to do more activities.

“So in that regard it has been a huge success.

“We are lucky . . . Before I lived here I lived in Toronto for a long time and I was still an avid outdoors person, but in Toronto I would drive two hours and hike five miles into the woods. In order to get to what I can get to in a 10-mile drive and 10-minute hike from Potsdam. And there is more to be discovered.”

Over the years of discovering the surrounding natural resources, Blair has also discovered that there are a bevy of hidden gems that are unmarked. And while he said one would need a personal guide to help find these trails and waterfalls and other such locations, he has certainly become that guide for many of us.

Until recently, the Tooley Pond waterfalls hikes were among those trails that were unmarked by the state Department of Environmental Conservation, unlike so many other trial heads. Hikers instead had to keep an eye out for an 8-by-10 board marking the trails, and really needed someone who knew the terrain. Blair was that person for the last 10-to-15 years.

And even after all that time, Blair is still discovering new trails.

“I discovered that there is a whole new hike on Tooley Pond Road that’s not marked, that nobody knows about,” Blair said at the time of of our interview. He reported back that this trail he described is now marked for public access. The name of that trail was not immediately available.

“There’s a huge granite outcropping with beautiful cliffs on the side of it that apparently people have been using for climbing for some time, but it is otherwise not known about at all,” he said. “And very recently the Department of Environmental Conservation sent a team of trail workers up there and they built a beautiful new trail that goes up to the cliffs, circles around back so that it’s not too steep, and then climbs up to the top of the hill (where) you have this incredible view over the surrounding countryside.”

And it gets better!

When he reached the top of the cliff, Blair said he was welcomed by an “incredible roar.” After looking around, he found the sound originating from Twin Falls, nearly a mile away, although it sounded like it was right next to him.

As a member and officer of the Adirondack Mountain Club, Blair celebrated what he said was a fantastic “bonanza” of people using and discovering these trails since the pandemic. He cited his club cohort, Mark Simon, who coordinates the Stone Valley Trail and has been a trail coordinator for more than 20 years, as having said he has never seen this much human traffic on local trails.

Moreover, aside from the ADK Mountain Club and PPL on the Outside, Blair pointed to the STLC Trails, a website administered by the St. Lawrence County Chamber of Commerce in partnership with the St. Lawrence County Trails and Nature Up North, as being a champion of trail information including maps, hiking tips, how to find equipment, outdoor challenges and more, making it easier for individuals and families to romp around the woods.

“It’s been really exciting doing this partnership with the library,” Blair said. “Definitely the folks on our executive committee at the (Adirondack Mountain) Club have encouraged me to continue doing it and do more.

“You know, our club wants to encourage people to take care of the wilderness. A lot of people really think that you join the Adirondack Mountain Club because you want to go hike the (Adirondack) High Peaks and, for some, that is true, but the big, long-term goal is we want people who enjoy the outdoors and who enjoy the wilderness because if we don’t have those people we don’t have the stewards for the future, and as much as we would like to think that the wilderness takes care of itself, it really doesn’t. It needs stewards. It needs people to help make sure that those trails are in good shape, to help make sure that those properties don’t get bought up and turned into something else, to really help manage this sort of public trust, this resource that we get to share all together. The club does a lot of things but that is certainly at the very heart of what the club is all about. Anything that helps to promote that is a great thing.” 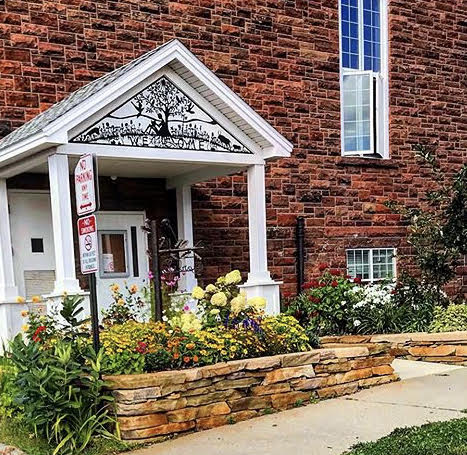 After months of planning and conversations with our friends over at the Frederic Remington Art Museum, we are proud to formally announce our stepping into a partnership where, once we reopen, we will begin selecting locations throughout the library for a rotating Remington art exhibit.

In announcing PPL’s partnership with the Frederic Remington Art Museum, Laura Desmond, the museum curator and educator, helps us kick it off by guiding us on a tour of the museum, highlighting some of the noteworthy pieces of art on display.

The partnership will also include activities we are developing, including potential talks and learning opportunities surrounding Remington’s art and other local art inspired by Remington, as well as a display of books in our collection related to Remington’s work and life.

The library is a lot of things for a lot of people; a place to come read and borrow books, a place to use the in-house computers, printers, or wifi, a place to take your little ones for storytime. The library has been a hub of literacy, a resource center, and a place capable of a wider cultural impact.

Through this partnership with the Frederic Remington Art Museum, we hope to allow members of our community who have not had the opportunity to travel to the beautiful Remington Museum in Ogdensburg to get a taste of it in their newly renovated library.

Additionally, we hope this virtual tour and any potential exhibit will encourage you to visit and support the museum and those that have made it the wonderful and world-renowned institution it has become.

The museum is safely open to visitors and the season hours of operation can be found by clicking here.

To learn more about the Frederic Remington Art Museum visit https://fredericremington.org/ or call (315) 393-2425.

More information about the partnership, exhibits and activities at PPL will be blogged about as they evolve and as we get closer to reopening, so stay tuned.